Ensuring that your employees are in a safe and excellent environment plays a pivotal role in enhancing their performance. One of the ways to can keep your employees safe is by implementing proper non DOT reasonable suspicion training for supervisors at work. These pieces of training help supervisors and HR personnel to identify some signs of a worker/ employee who might be under the influence. Furthermore, it also helps to understand some necessary legal procedures when requesting an employee to take a drug test.

What is a reasonable suspicion?

Reasonable suspicion is a legal term that is common in law enforcement. However, reasonable suspicion is not an accurate representation. Instead, it is largely based on a hunch or suspicion that someone might have an illegal substance or using drugs. However, there must be concrete and specific facts that an employee might be under the influence of drugs or other substances.

Reasonable suspicion is also used by traffic police, schools, government and private sector, and some child abuse cases. In the professional world, reasonable suspicion is usually applied the same way as it is used in law enforcement. The term is usually used in drug testing policies and procedures when creating HR handbooks and regulations for dealing with cases of drugs and substances at work.

If you are an employer, supervisor, or work in human resources, you need to be keen when investigating someone using drugs. You must be able to identify a few signs to have grounds for reasonable suspicion. The signs are as below:

Can an employee conduct a random drug test?

In some states, employers cannot carry out random drug tests without reasonable doubt about using drugs. However, employers, especially in private institutions, don’t need a reasonable doubt to carry out a drug test in some states. Some courts have also ruled that your employer can carry out random tests to keep employees safe while handling the machines if your work requires you to deal with heavy machinery. In the majority cases, instant drug testing is used for a random drug test. 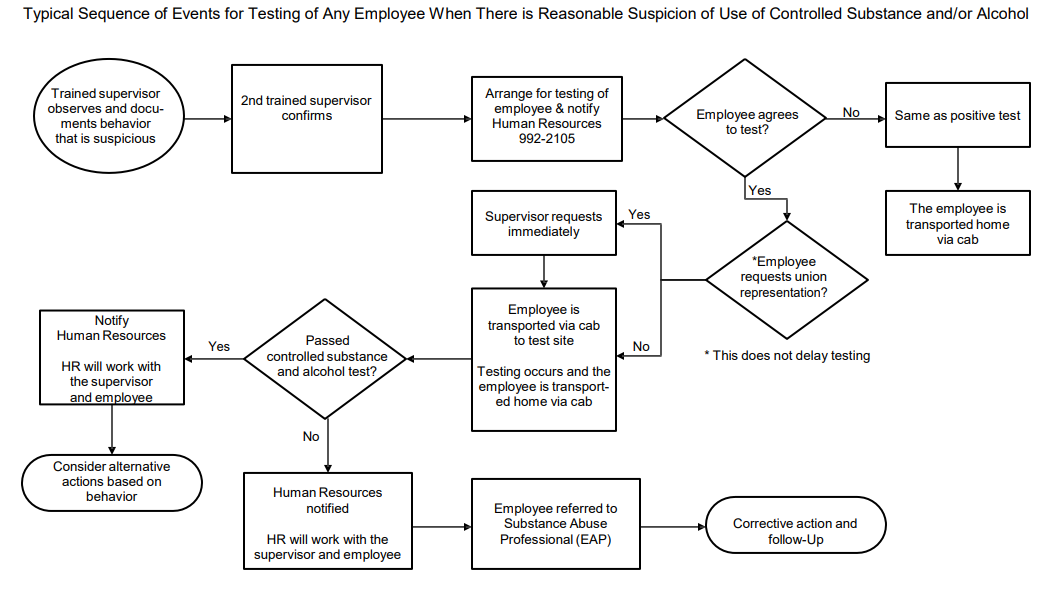 As an employer, it is important to have proper policies and guidelines to deal with reasonable suspicion. HR managers and supervisors must also be well versed when it comes to post accident drug testing laws. This helps provide a proper framework regarding investigations and recommendations for drug tests. Here is how to check for a reasonable drug test:

Let’s assume you suspect or have received complaints about an employee being under the influence. You need to document the instance or take a statement immediately. You should also note details such as the suspicious behavior of the employee. What were some of the signs you observed? It is important to have a proper written record of this statement not to appear going by hearsay or gossip from people in the office.

Take note of the signs when observing the employee. Are their eyes dilated? Do they have any drug or alcohol odor? Are they unsteady or unusually dizzy? Is their speech slurred? Are they unconscious, or do they sleep a lot?

Once you have received both personnel witness accounts and appear to be the same, resign the employee some of their duties and call them for a formal meeting. In the meeting, discuss some reasonable suspicion examples and explain why they need to take a drug test and why you have resigned him/her. Once the employee agrees, organize for a test as soon as possible.

How to handle Results?

Once the employee agrees to go for a drug test, he/she should not report to work until the results are out. If the drug tests come back negative, the employee is free to return to work. However, if the tests reveal any presence of drugs, an employer has two options. First, the employer may give the employee a last-chance agreement stipulating that the employee will seek treatment and counseling services. Then, if caught again, they can be relieved of their duties. The other option is to terminate the employee immediately if indicated in the company’s drug-testing policy.

In a report, the US Labor Department observed that drug and substance abuse contributes to around 65% percent of workplace-related injuries. Therefore, employers must put in place a solid post accident drug tests policy that abides by OSHA rules and guidelines. In addition, the employer must have reasonable doubt that the person was under the influence. This testing for staff is quite popular.

The Occupational Safety and Health Administration provides vital guidance regarding issues such as what is a non dot recordable accident, the procedure to document post accident drug testing cases, and the do’s and don’ts if you are going for a drug test for your employer.

OSHA requires that employers not use threats of a drug test as retaliation if they report a workplace injury. It also advocates that employers report work-related injuries immediately and keep proper and elaborate electronic records of the same. If a company has less than 20 workers, they are not particularly obligated to observe this. However, companies with more than 250 employees and are in high-risk jobs must keep an accurate electronic record of when the event occurred and what they should do.

In addition, OSHA discourages that there should be a mandatory drug test when a workplace accident happens and instead advocate that there must be reasonable suspicion. By reasonable suspicion, it means that the test should only be administered if the employer believes that the employee was under the influence. The tests should be done 8-32 hours after the accident has happened. Any reason regarding the delay of a test should be done revealed in a memorandum or affidavit or both for the test administration.

The Department Of Transportation provides rules and procedures on what is dot recording accident. It mainly deals with traffic accidents and workplace accidents. Some of the instances where a DOT drug test might be required to be done include:

Post accident drug testing by a DOT drug test rules recommend that for a test, there must be a memorandum or an affidavit provided before the test. In addition, the drug test must be carried within 32 hours after the accident happens. If, due to some reason, the 32-hour window period lapses, the police should be provided an elaborate reason in writing about the same. If a test is submitted and does not meet that criterion, it is marked as a fatal flaw in the lab and is immediately rejected.

What should you have in your car just in case of an accident?

Drivers should be keen when driving and should have a few things just in case of an accident. Some of the things you are required to have included:

Which of the following might make you suspect that an ID is fake?

It is important to take the right steps to ensure that your workers are safe as an employer. One of the ways to do this is by having drug test policies that will keep your workers safe. What are some of the ways you keep your employee safe? Do you encourage mandatory testing? Share your thought in the comments section. Also, we recommend to you the article about drug testing questions.

Family Medicine for America's Health
Recent Posts
You may also like
Do cannabinoids from topicals enter the bloodstream?
Are you afraid of how to pass a weed drug test if you
0538
Verifying Medical Marijuana Authorization — MRO or Employer?
Due to the legalization of marijuana and its medical
0377
Types of Drug Tests. Essential
A drug test is done to identify the existence of substances
0624
The Future of Pre-Employment Marijuana Testing
With the recent changes in the jurisdiction of marijuana
01.2k.