The Future of Pre-Employment Marijuana Testing

With the recent changes in the jurisdiction of marijuana, there is time to stop, pause, and then rotate your eyes to calculate the future of pre-employment marijuana testing, is it raising or declining? Here another question arises that Amazon the second biggest employer in the United State does hold any drug test for weed in 2021?


Pre-employment drug testing specifically for marijuana is common at the workplace to test the suitability and mental level of the employees for the job. The basic support behind marijuana testing is to increase the productivity and safety of the workplace. But the marijuana has been legalized in various states either for recreational or medical purposes. With the dramatic increase in drug users especially adults in the US, there is a question mark on the status of pre-employment marijuana testing.

There is currently quick change in the legal landscape of marijuana and the workplace-so workers have to scroll down to the federal and state laws accompanied by the court decisions. It will help you to revise a policy regarding the drug testing practice for marijuana. The legalization of marijuana has affected the policies that companies use to maintain the safety and productivity of workers.

As marijuana legalization is processed so far, some locations are more outright in their decisions. New York City, Philadelphia, and Nevada have prohibited pre-employment marijuana testing in most companies. Employers must navigate the maze of marijuana laws for the safety-sensitive position and check the objectives and tasks performed by the employees.

Here another point of consideration is that the states provide some sort of employment protection to the employees with the positive drug test. The employers then have to struggle and comply with federal and state laws before terminating an employee.

How many States have Legalized Marijuana?

Have a look at how legal marijuana legalization has processed so far and the map of legal weed states is increasing.

Overall, the 37 states of the US have legalized marijuana either for medical or recreational use. Mean they give full access to the citizens for cannabis use. Furthermore, each of these states varies in its laws of marijuana use for adults’ medical purposes.

Map of States with marijuana laws

A brief overview of the states by the change in the landscape of the weed laws in the form of a map is listed as: 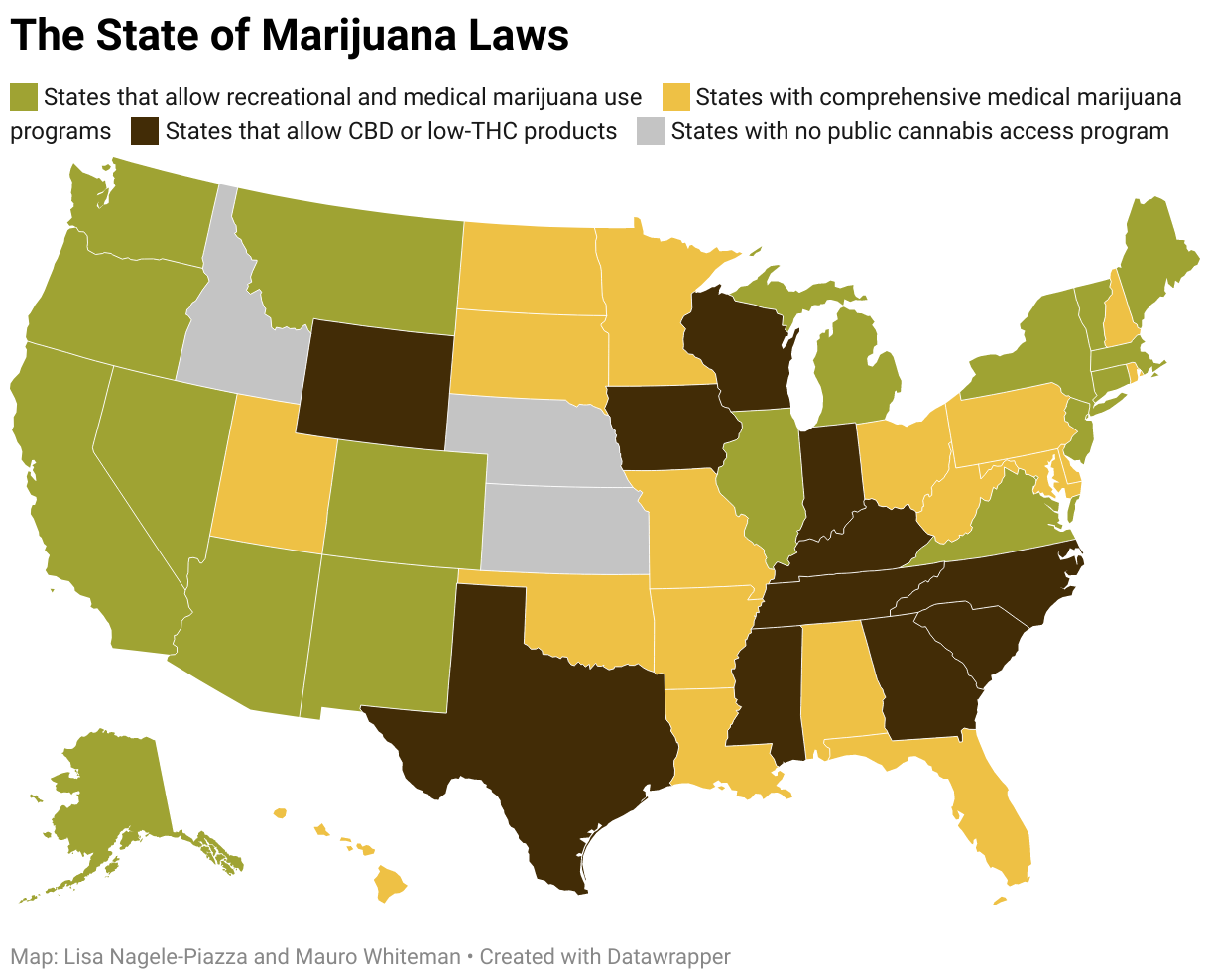 Why Companies are Eliminating the Drug Testing?

It is quite simple to answer that why companies are eliminating workplace drug testing-simple to meet the labor shortage and attract workers. Experts say that this development can create racial equality in the workplace to level the black and brown employment opportunities. Supporters claim that the presence of drugs in the employees at a minimum level is not affecting their job performance. That’s why employers are not requiring drug screening for perusing a job.

After the legalization of marijuana and considering the shortage of labor, many companies and employers turned to eliminate marijuana drug testing. Here, are some of them.

It might be the big news for the employees that Amazon has declared that their jobs don’t require a drug test except the position regulated by the Department of Transportation.

CEO Worldwide Consumer at Amazon Dave Clark says “We will not include the marijuana in our comprehensive drug screening program for any position not regulated by the Department of Transportation, and instead we will use it as the same of alcohol use. But we will continue to check on the employees and can test them after an incident”.

The main point that was used as a base by Amazon is the starling stats that show the increase in the positive cannabis test rates among the employees and the legalization of cannabis by the states. The announcement was made by Amazon on September 21, 2021. Amazon claimed that marijuana testing is acting as a barrier between the person and the job as there is a great increase in the positive number of cannabis users since the legalization of marijuana. Stats show that the marijuana positivity rate was 3.6% among the US workforce that is a 16% increase from 2020 for 3.1%.

Walmart does not do any pre-employment drug testing for the workers but you may be required to submit a drug test in specific cases. In case of any injury requiring medical attention or suspicion of illicit drugs, the employees are tested. The urine drug test is the standard test for the Walmart Drug Screening.

Does Walgreens Do THC Drug Test?

Walgreen holds the pre-employment drug test for their employees to be hired. They check your background and a drug test for the safety of their workplace, and you should give the drug test without any hesitation.

President Biden is also in support of the decriminalization of cannabis. Most importantly the 91% of the adults also that marijuana should be legal. The pre-employment marijuana drug testing is eliminated because of:

Resultantly there is an increase in the list of companies and the jobs that don’t do drug test in 2021 including Amazon and Walmart.

By reviewing the state and federal laws, the employee must review the policies and adopt best practices.

Family Medicine for America's Health
Recent Posts
You may also like
Is tea helpful for marijuana detox. Is it possible to pass a drug test?
Many of us have tried countless methods to pass drug
083
Types of Drug Tests. Essential
A drug test is done to identify the existence of substances
089
Detection time for weed in hair
Wondering, how long does weed stay in your hair?
099
The Most Common Questions We Get About Drug Testing
A drug test such as 5 panel urine drug test is a technical
0264