9 US Cities with the Highest Drug Use

Drug and substance abuse is a relatable subject when it comes to the United States. Drug use statistics in America show that alcohol, cocaine, and opioids are a huge menace in society. This problem has led many to seek treatment. Those who have not been fortunate enough to get treatment end up dying due to overdoses or other implications. As a result, substance use disorder has been classified as a chronic mental health condition. This is mainly because drugs interrupt the way the human brain works and causes impairment. In some cases, it leads to dependence, and people cannot properly execute their duties without a sniff, puff, or even sip of a substance. Before reading, you should keep in mind that sometimes you can receive false positive results.

Rate of Drug Addiction in the US

Drug addiction in the United States is widespread among various cities and towns. For instance, Americans between 18 and 25 are more likely to consume addictive drugs. The Addiction Center estimates that at least 21 million people in America suffer from a form of addiction. Yet, of these 21 million people, only 10 percent of them seek treatment. It’s even more shocking that between 1990 and 2017, the rise of deaths due to overdoses tripled, with 700,000 people dying in 2017.

Driving under the influence cases has increased as well, with 34.2 million people getting a DUI. About 12.8 million people who got DUIs were under the influence of drugs. In addition, at least 20 percent of people who suffer from anxiety or depression will possibly have substance abuse disorder. Economically, drug and substance abuse addiction in the country leads to a 600 billion dollars loss annually. This article looks at some of the most abused drugs in the US and the top 9 cities contributing to this.

Top 9 cities with the most marijuana use 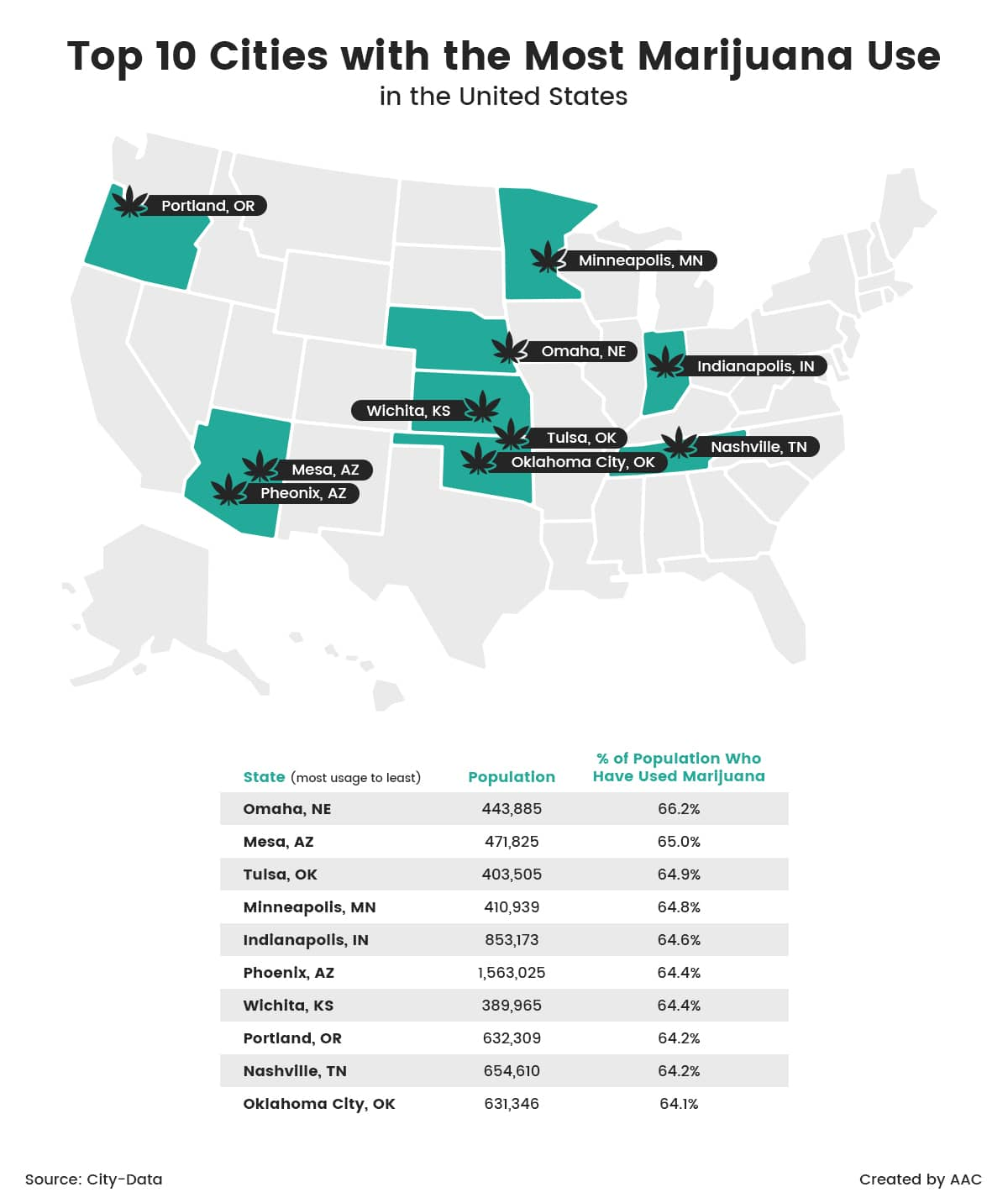 Marijuana is one of the most commonly abused drugs in the United States. Consumption is quite high in different cities, such as New York, consuming about 77.4 metric tonnes of marijuana in a year. However, when comparing population, Omaha is the city with 66.2% of the population using marijuana. Here are the nine cities with the most marijuana use, according to American Addiction Center:

Top 9 cities with the most cocaine use

Cocaine is the second most used widely used illegal drug in the United States after marijuana. It is predominant among young adults between 19 and 28, according to the Substance Abuse and Mental Health Services Administration (SAMHSA). Around 54% of people in this age bracket have tried cocaine once. In addition, nearly 1 in 5 people are using cocaine in America as well. Phoenix, AZ, is the leading city with 23% of the population using cocaine. On the other hand, Wichita, Colorado Springs, and Fresno tie for the last position, with 21.8% of the population using drugs. A proper list of top cities with the most cocaine use is as follows:

Top 9 Cities with the most Heroin use

Top 9 cities with the most methamphetamine use

Methamphetamine, popularly referred to as meth, is one of the most popular drugs in the US. The drug is most popular among young people because of its side effects. For instance, it is widely used because it increases the level of dopamine in the brain. Dopamine is a hormone released by the brain to keep people happy. Other effects associated with meth include being talkative, low appetite, increased body temperature, and blood sugar. The National Survey on Drug Abuse in 2017 suggests that 16.6 million people are using meth in the United States. Meth is the second most widely used illegal drug in the United States after marijuana and cocaine.

Michigan is considered the meth capital of the US due to a high number of seizures. However, Phoenix is the leading city regarding meth, with roughly 15.1 percent of people using it. Arlington, Wichita, and Tulsa are last in the list of top 9 cities that use the most methamphetamine.

Top 9 Cities with the most drugs use overall

Data from the American Addiction Center shows that Mesa, Phoenix, and Tulsa in Arizona are places where drug use is the most rampant. Omaha, Miami, San Francisco, Seattle, and Washington DC are other cities where drug addiction is widely rampant as well. You can find a complete list of cities and their population drug use here.

Drug and substance abuse continues to grow at a soaring rate. Some of the people using these drugs even end up mixing them with others. This causes the effects to be more serious and can even lead to complications. Which city are you from? Which drug is currently the most used in your area? Please share with us in the comment section. The best thing you should do is medical consultation. You can also read an article about THC detox if a drug test is coming. If you are wondering, how dangerous long-term use is, read the article about the long-term effects of drug abuse.

Recent Posts
You may also like
What Happens if You Smoke Marijuana Daily?
Smoking cannabis may be something you enjoy, but cutting
03.4k.
Are Kids With Drug Abusing Parents Likely to Become Addicted Too? Data From the Most Drug Infested Cities in the U.S.
This topic is not easy to deal with as people may have
01.3k.
Underage Drug Addiction in the United States
Teenage drug addiction has become a menace in the United States.
0588
Long-Term Effects of Drug Abuse
Drug addiction is a disease that affects 21 million
02.6k.