Are Kids With Drug Abusing Parents Likely to Become Addicted Too? Data From the Most Drug Infested Cities in the U.S.

This topic is not easy to deal with as people may have contradicting opinions. This post will explain why drug abuse is more common with teens whose family members abuse drugs.

The question is – are kids with drug-abusing parents likely to become addicted, too? Let us start this discussion by presenting to you some statistics that can give you a glimpse of the direction of this post.


According to the National Council on Alcoholism and Drug Dependence or NCADD, drug addiction and alcoholism directly affect the whole family regardless of age.

These statistics are quite alarming, and if not dealt with properly, they will worsen and significantly affect every child’s future.

Let’s go deeper into the topic.

What is Drug Abuse?

Addiction is a disorder of the brain and behavior. When you’re addicted to drugs, you can’t stop yourself from using them, no matter how dangerous they are. So the sooner you seek treatment for drug addiction, the more likely you are to prevent some of the disease’s more severe repercussions.

Addiction is not limited to heroin, cocaine, or other illegal narcotics. Alcohol, nicotine, sleep and anti-anxiety drugs, and other legal substances can all lead to addiction.

You can also become addicted to narcotic pain relievers, generally known as opioids, whether purchased legitimately or illegally. In the United States, this problem has reached epidemic proportions. Opioids were responsible for two-thirds of all drug overdose deaths in 2018.

You may initially opt to consume a drug because you enjoy the way it makes you feel. You may believe you have control over how much and how frequently you use it. However, medicines alter the way your brain functions over time. These physical alterations can be long-lasting. They cause you to lose control and can result in harmful behavior.

What are the Most Commonly Used Psychoactive Substances among U.S. Parents?

Psychoactive substances, often known as psychotropic drugs, are chemical substances that alter a person’s mental state by influencing how the brain and nervous system function. This can result in drunkenness, which is frequently the primary reason people choose to use psychoactive drugs.

The most commonly abused stimulants are as follows:

A person abusing the stimulants mentioned above may experience the following effects:

Opioids are extracted from the poppy plant or produced synthetically. Some of the commonly abused opioids are:

Abusing the above may cause you the following effects:

Some of the commonly used hallucinogens are as follows:

This group of substances may result in the following:

Benzodiazepines are the most popular depressant usually used by adults. Some of its effects are as follows:

Excessive use of the substance can cause

See the chart below from drugabusestatistics.org on users of the substances commonly abused by adults, particularly the parents. 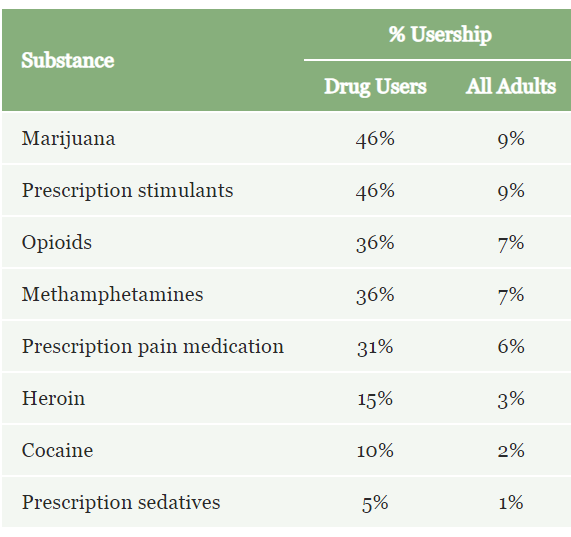 Why is Drug Abuse More Common with Teens Whose Family Members Abuse Drugs?

Regardless of age, the people who raise us have a profound influence on us. These impacts include the DNA we acquire from our biological parents and the behaviors, habits, attitudes, and communication styles we learn from our adult caregivers. The same principle holds for how we use alcohol or drugs.

According to the National Institute on Drug Abuse, 25% of American children grow up in substance abuse homes. According to Current Drug Abuse Reviews, kids with drug addict parents are nearly twice as likely to develop addiction problems themselves. These youngsters are also more prone to suffer from:

The table below shows how vulnerable kids are if their parents abuse drugs based on the different studies.

The Effects of Parental Substance Abuse on Children and Families

Parental SUDs have a negative impact on the family by disrupting bonding, rituals, roles, routines, communication, social life, and money. In addition, a parental SUD creates an environment of secrecy, loss, conflict, violence or abuse, emotional upheaval, role reversal, and terror in families. 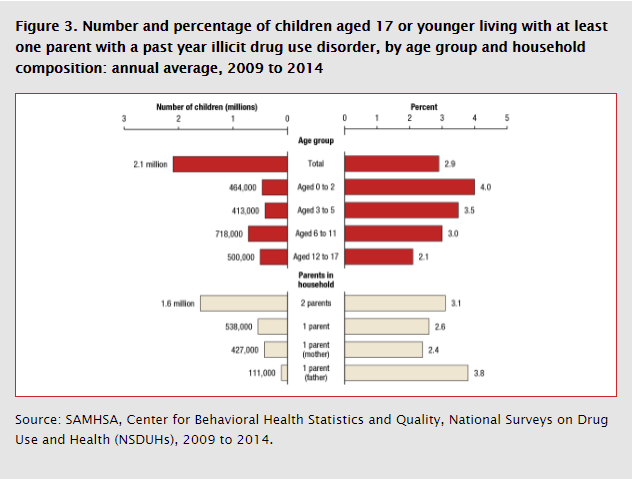 NSDUH data is likewise used to estimate the number of children who live with at least one parent who has had an illicit drug use disorder in the previous year. Below are important facts regarding children of drug-addicted parents which authorities should focus on. These are not just numbers. These are lives of the children that might get ruined if no action is taken.

Estimates of the number of children living with at least one SUD parent are needed for adult prevention campaigns and programs that support and protect afflicted children. Early intervention should be applied to prevent any harmful effects on children. Former drug addicts’ advice to parents can be very helpful.

What are the chances that a Kid with Drug Abusing Parents will Become a Drug Addict in the Future? 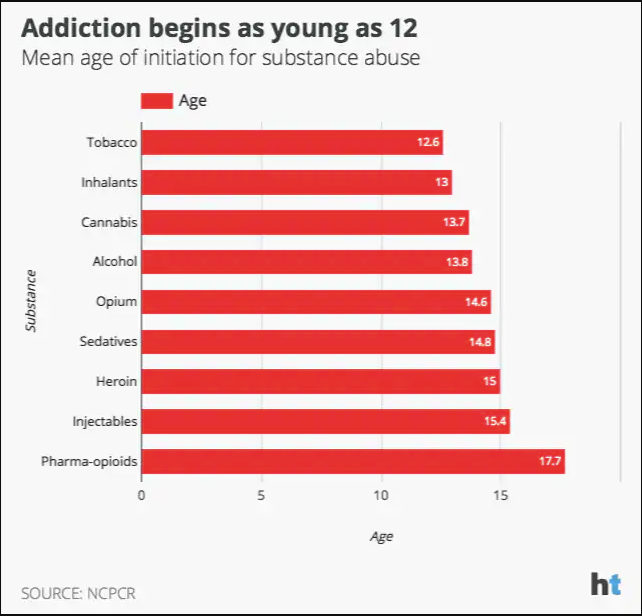 Parents have a powerful influence over their children, and they have the most impact on whether or not their child will engage in drug abuse and addiction. Drug-addicted mothers’ effects on children are more serious since they are always with them. If they see you getting addicted to a substance at an early age, they will think it’s the right thing to do. As a result, they will do the same thing, thinking that it’s okay because they see it from their parents.

Aside from your children, other family members will also become addicted to the substance. The chances of having more than one member in a family with a problem are high. This will create a pattern of addiction, and the cycle will continue if nobody breaks the chain.

The possibility of a child with at least one parent into drug addiction to become a drug addict in the future is eight times more likely compared to a drug-free family.

Effects of Parental Substance Abuse on Children and Families

When drugs are abused in a family, behavior is unpredictable, and communication is hazy. As a result, family life is marked by disorder and unpredictability. The behavior of a person might range from loving to withdrawn to insane. Structure and rules may be absent or inconsistent. Children who are unaware that their parent’s conduct and mood are influenced by the amount of alcohol or other drugs in their system may feel confused and uneasy.

Children Feel Neglected and Blame Themselves

People say children of drug addicts are frequently neglected. They care about their parents and love them, but they are furious and saddened because their parents do not love them enough to stop using.

Despite their hardship, many of these youngsters blame themselves for their parent’s substance misuse. They believe that their parents yell when their children don’t stop fighting, don’t care to keep the room clean, don’t get higher grades. In turn, they would drink or do drugs.

Some kids try to keep their drinking or drug usage under control by obtaining straight A’s, keeping the house clean, and getting along well with their siblings. Others retreat, hoping not to cause any disruption that would lead to a parent drinking or using. Finally, a few people recognize that children cannot make their parents drink or take drugs, nor treat their parents’ substance abuse problems.

Children of substance abusers are frequently terrified. They can be the victims of physical assault or incestuous relationships. They may also see violence – alcohol and other substance abuse usually coexists with domestic violence. In addition, drug-addicted parents’ effects on children’s life are quite alarming.

As a result, these children may experience post-traumatic stress syndrome, with symptoms such as sleep difficulties, flashbacks, depression, and anxiety common among victims of war crimes. These youngsters are concerned for their safety, and possibly parents can become ill or die due to their drinking or drug use. They are aware that their dad may drive drunk or get into confrontations on the street. In this case, parental drug use and child protection are needed.

Substance misuse by a parent disrupts a child’s normal development, putting these children at a higher risk for emotional, mental, and physical health problems. Because parents who abuse alcohol or other drugs are more likely to experience domestic violence, mental illness, unemployment, divorce, and legal issues, their capacity to parent effectively is significantly hampered.

Children of substance abusers (COSA) are more likely than their classmates to suffer from depression, eating disorders, anxiety, and suicidal ideation. Furthermore, COSAs are three to four times more likely than the general population to develop an addiction to alcohol or other drugs.

Sexual and Physical Abuse of Children

Sexual and physical abuse of children is more prevalent in homes when one parent abuses drugs. In addition, sexual abuse is more common in chaotic and dysfunctional homes when communication breaks down, and responsibilities are ambiguous.

Children who grow up in high-conflict households have poorer self-esteem and weaker internal control. This increases the likelihood of COSAs being re-victimized in the future. For example, Female COSAs are more likely to be involved with substance-abusing men, leaving them vulnerable to further abuse.

Children from substance-abusing households are more likely to have learning difficulties, attend more schools, repeat more grades, be truant, delinquent, and drop out of school due to pregnancy, expulsion, or institutionalization.

The above facts and data are insufficient to explain why drug abuse is more common among teens whose family members abuse drugs. However, the studies conducted by various agencies can provide a clearer view of the consequences of having parents who use drugs.

However, the truth remains that most children of substance abusers do not end in disaster. Only one in every four children with at least one substance abuser parent will become drug abusers, whereas the other three will not. Most children and teenagers can cope with their surroundings and achieve in life by drawing on their inner qualities. Children exposed to drug-abusing households can be assisted in various formal and informal ways to tap into their resiliency.

Family Medicine for America's Health
Recent Posts
You may also like
What Happens if You Smoke Marijuana Daily?
Smoking cannabis may be something you enjoy, but cutting
0267
9 US Cities with the Highest Drug Use
Drug and substance abuse is a relatable subject when
0349
Underage Drug Addiction in the United States
Teenage drug addiction has become a menace in the United States.
0172
Long-Term Effects of Drug Abuse
Drug addiction is a disease that affects 21 million
0617